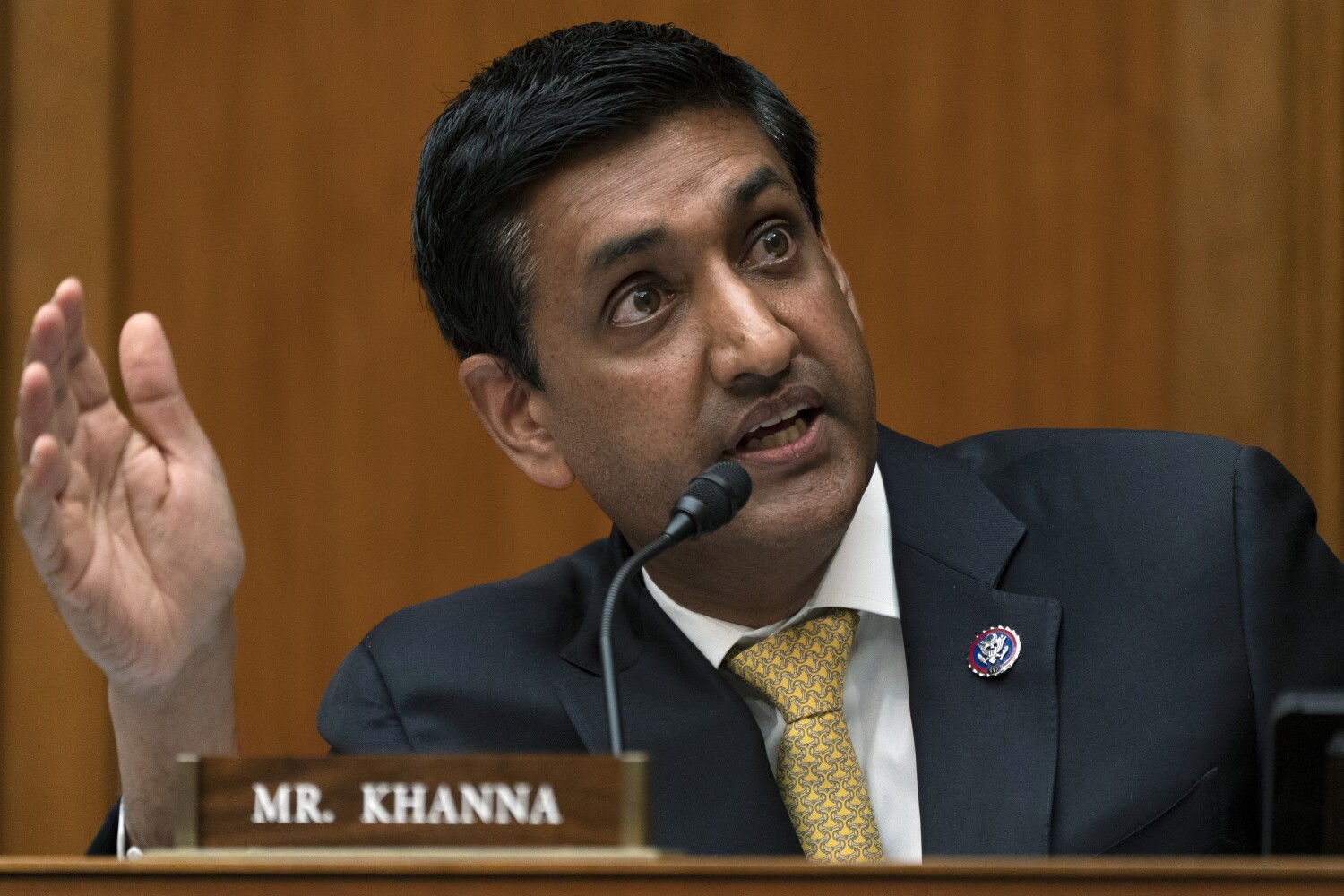 As House members return to Washington on Tuesday after a weeklong recess, progressives are looking toward how to recover from recent defeats.

In a recent interview, Rep. Ro Khanna (D-Fremont) talked about how progressives view Biden’s presidency one year in, how Democrats should talk about the economy, what his competition bill the House is poised to take up this month will do and what to expect in his upcoming book.

Below is a transcript of the Jan. 18 interview, lightly edited for clarity:

LAT: Could you talk about what progressives were able to accomplish in 2021 and what goals the Progressive Caucus is eyeing this legislative year?

KHANNA: We had a number of critical victories. First, the child tax credit in the American Rescue Plan was an extraordinary advance on behalf of social justice. It helped cut child poverty in half. It was the first time in the country that we had monthly payments going to working families in an amount that really could help them provide education and food and clothing for kids.

Second, the stimulus checks that led to consumer demand being strong in an economic recovery, which is at full employment. No one thought that we could get to full employment by this time. That is a direct result of a rejection of austerity economics and a commitment to increasing consumer demand.

Third, I would argue the hearings that I chaired on climate with Big Oil — for the first time testifying under oath in Congress about climate disinformation and in some cases admitting the false statements of the past — has been the first time Big Oil has been held accountable, analogous to the tobacco hearings.

I want to turn to [Democratic Sens.] Joe Manchin [of West Virginia] and Kyrsten Sinema [of Arizona] next. Manchin’s essentially killed [the Build Back Better Act], at least for now, and Sinema seemingly killed voting rights. What’s their place in the modern Democratic Party? How do progressives view those two, just given their role in continuing to stall some legislation that the House passes and then it goes to the Senate and usually goes nowhere?

KHANNA: Well, I have a good relationship with Sen. Manchin. I’ve had a good relationship since I went to visit Beckley, W.Va., in 201[8]. In fact, the L.A. Times — it was Evan Halper at your paper. He came to West Virginia with me, and I think there’s a — if you Google it, there’s a whole story he wrote about my trip out there on tech jobs. So I’ve since then had a cordial relationship with him. I understand that he comes from a state that [former President] Trump carried overwhelmingly, that he has a different perspective on a number of these issues, but I’ve been working to see what we can do in terms of getting forward on a compromise. In fact, I’m hopeful that we still may be able to get some of the key provisions of Build Back Better on climate passed. And on universal preschool.

Sinema is more enigmatic to me. I don’t understand how she can be as oppositional, coming from a state that Biden carried. I don’t understand her speech to the Senate on voting rights, not even having the courtesy to hear the president out before doing that. And the question I’ve asked of her is: ‘If she were in the Senate in the 1960s when the 1964 Civil Rights Act was put forward or the ’65 Voting Rights Act was put forward, would she have voted no on those if it was just a 51-vote majority that would pass them or would she have then conceded that you should pass fundamental legislation like that with 51 votes?

You mentioned BBB. Are you hopeful that some of the provisions could eventually be relitigated, renegotiated and passed?

KHANNA: I think there is a good chance we can get the climate provisions, universal preschool, some of the housing provisions, some of the tax provisions in a bill that passes. And of course prescription drugs [being negotiated by Medicare.]

Do you think there are 10 Senate Republicans who agree with those policies as well?

KHANNA: Unfortunately not. That’s the sad thing here, that this is so difficult because Republicans have been oppositional on almost all of these policies.

So I know you have a book coming out soon. I think it’s next month. Could you talk about what readers can expect from that?

KHANNA: The book is called, ‘Dignity in the Digital Age,’ and it has two main themes. One, we have to decentralize the innovation economy to create opportunity where people live. There’s $11 trillion of market cap in Silicon Valley, and we’re going to have 25 million digital jobs by 2025. They shouldn’t all be in coastal cities like L.A., Silicon Valley, Miami, New York. We need to get those digital opportunities into rural America, into Black and brown communities. The book provides a concrete roadmap of how we can do that.

Could you take us into the book-writing process? Like how do you find time to actually write a book and also be a member of Congress and chair a subcommittee and hold these hearings?

KHANNA: I have an amazing wife. During COVID, my travel was much more limited, so I found myself, like many Americans, at home and doing things through Zoom and Facebook. That gave me the opportunity to write in the evenings, and I was able to do it. I don’t think I’d ever be able to do it if it weren’t for that year where I wasn’t traveling as much.

Also, I really enjoyed it. I love being a member of Congress, but so much of being a congressperson is reacting to events, reacting to situations. You don’t get much time to think and read and reflect. So writing a book, for me, was a great outlet of stepping back from it all and engaging in ideas.

KHANNA: I still believe [the Clinton campaign catchphrase] ‘It’s the economy, stupid.’ Most Americans want their kids to do better. They want their kids to have a chance at economic prosperity and success. And the Democrats need a message of how we’re going to provide economic opportunity in the 21st century for all communities, particularly for communities that face deindustrialization and for communities that have been denied the economic prosperity of the modern economy. My vision for that is, one, to have new digital opportunities in jobs across America in communities and, two, to become a nation of producers again. We ought to mobilize the federal government in partnership with the private sector to produce semiconductors in this country, to produce advanced factories in this country. To produce so many of the materials and equipment that we needed in the pandemic that have been offshored. I believe that kind of economic message of helping communities generate wealth, making us a nation of producers, really can resonate.

Is that a message you’ve been willing or able to share with the White House?

KHANNA: It is. One that I continue to share with the White House. It is one that I write about in the book. There’s another book coming out by Bob Hockett called, ‘Nation of Producers,’ that I believe should be required reading for every senior person at the White House, where Hockett talks about what we need to do to produce things and make things in this country again.

I have a bill I’m working on with [Republican Sen.] Marco Rubio [of Florida] to be able to finance the manufacturing and production in America again in partnership with the private sector, and we’ll be releasing that in a few months.

I believe you have another bill that’s been renamed USICA (United States Innovation and Competition Act) in the Senate. What’s the status of that?

KHANNA: That was my bill with [Senate Majority Leader Charles E.] Schumer [of New York], [Republican Rep. Mike] Gallagher [of Wisconsin] and [Republican Sen.] Todd Young [of Indiana]. It will create the largest increase in federal R&D dollars since the Cold War. It has passed the Senate. Speaker [Nancy] Pelosi [of San Francisco] has said it’s a priority for her, and I believe she will bring it for a vote in the House in the next month. And I’m working with her and my colleagues in the House to make sure we pass it and we get it to the president’s desk. It’ll be the largest increase in tech research and development that we’ve seen since the Cold War.

So if this bill does become law, how do you explain to your constituents what it’ll actually do? What’s the practical impact of all this money coming and these opportunities being created?

Second, it’s going to create tech hubs not just in Silicon Valley and L.A., but in middle America and in the South, in places like St. Louis and Buffalo so that we can bring the technological innovation to midsize cities and help create a modern prosperity across our nation.

How’s Joe Biden doing as president in your mind or in the mind of progressives?

KHANNA: He’s doing well. He’s been dealt a very, very hard hand. In some ways, a harder hand than even [former President] Barack Obama was dealt. Nearly 40% of the country doesn’t believe he’s the legitimately elected president. The Capitol was attacked to prevent his certification. We’ve had variants of COVID continue to throw a wrench in every Americans’ daily routine. And we’ve had an economy that is suffering both from supply shortages and from people who were put out of work. So in light of all of those challenges, President Biden has provided a steady hand, he has made progress with the American Rescue Plan, he has helped us get to full employment, he has distributed the vaccines, and he’s working on a forward-looking agenda. So I believe he’s done well.

How are members of your caucus, I guess the broader House Democratic Caucus, how do they seem to be looking toward the midterms right now? Are they optimistic, or are people resigned to the history of what happens in the first election year of a president’s term?

KHANNA: We know it’s going to be uphill. No one is delusional, given the challenges the country faces and given the fact that a president always has a tough time in the first midterm. But what gives us hope is we have a good record to run on on the American [Rescue] Plan, on infrastructure, and we have some very strong candidates in the frontlines. People like [Rep.] Mike Levin [D-San Juan Capistrano], who are going to do very, very well.

Is the number of retirements we’re seeing from a number of House Democrats a sign of something or just a coincidence of people deciding it’s time for them but not necessarily reflective of a bad feeling about what’s to come?

KHANNA: I think it’s just coincidence. I think we have a moment of generational change in Congress. A lot of younger people are coming in, and people who’ve had distinguished careers I think are in some cases stepping aside. That’s healthy in a democracy. A democracy depends on renewal and having new voices and new, younger leaders get a chance.

We sowed seeds of terrorism, worshippers not killed even in India: Pak minister on Peshawar blast