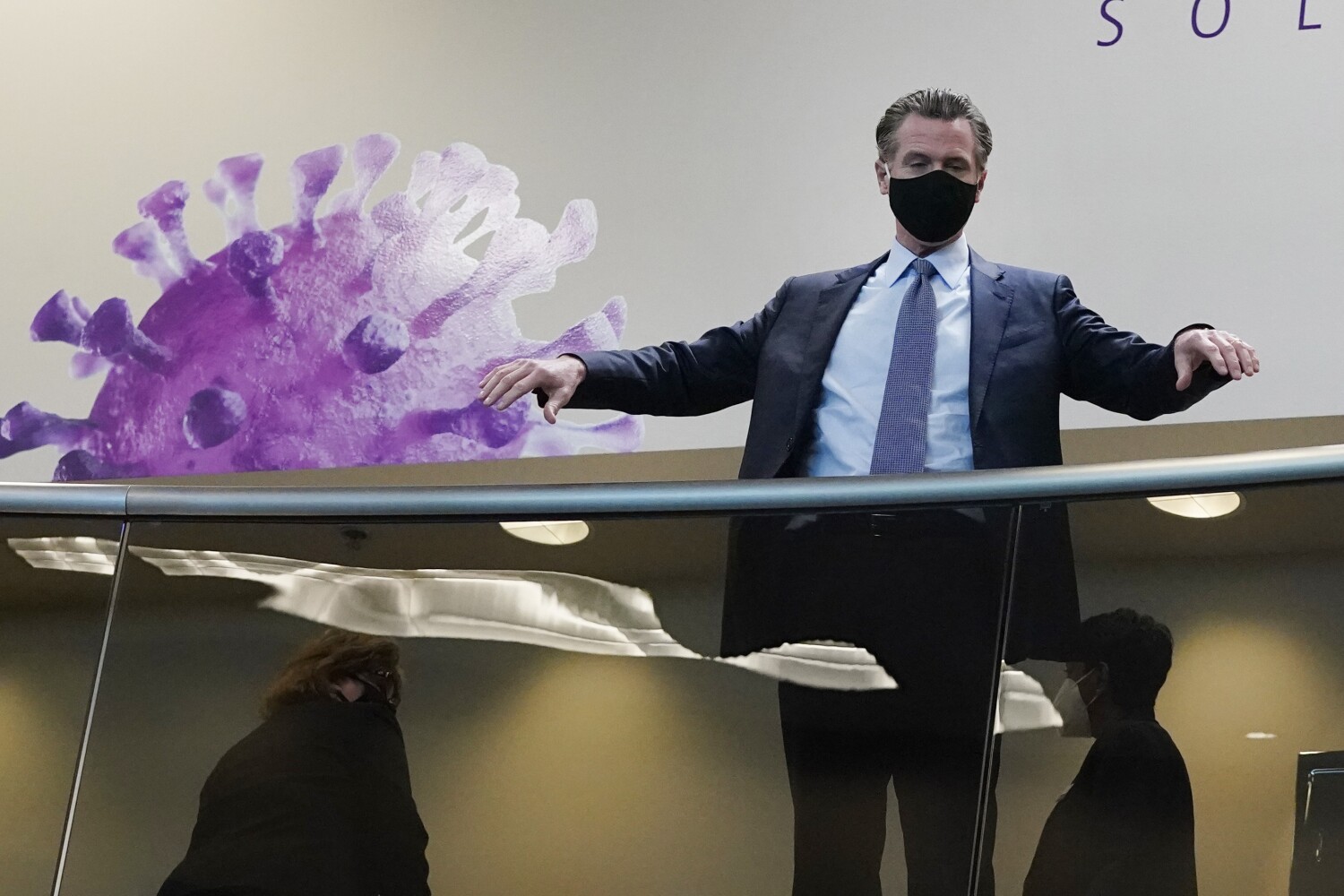 After investigating its own COVID-19 testing lab for much of the year, the California Department of Public Health closed its case without issuing sanctions as the state released a long-overdue report Monday that downplayed widespread issues identified during inspections at the Valencia Branch Laboratory.

The lab, which was opened in partnership with Massachusetts-based diagnostics company PerkinElmer, has been beset with problems since the $25-million facility opened late last year. The Newsom administration promised a full report in March on “significant deficiencies” found during inspections, but it was not released until Monday — weeks after the state renewed its $1.7-billion, no-bid contract with PerkinElmer to keep the testing site going.

Newly released documents show California inspectors raised alarms earlier this year about whether staff were properly trained, how the lab was reporting its own processing errors and whether protocols that reduce the likelihood of contamination were being followed, all of which called into question the accuracy of tests at one of the largest testing facilities in the state.

“It should not have taken 287 days for Californians to receive answers about this taxpayer-funded COVID testing lab,” said Sen. Scott Wilk (R-Santa Clarita). “Especially when our vulnerable students are the ones at risk, parents and families deserve accountability and transparency from the Newsom administration.”

The Laboratory Field Services division in the state public health department issued a “Notice of Intent to Impose Sanctions” letter on Oct. 21 after finding that the Valencia lab had not corrected all of the issues identified during its inspections, despite being given several extensions during the year. Ten days later, the state allowed the contract with PerkinElmer to automatically renew, which a public health spokesman said was done to protect California from a potential winter surge of COVID-19.

“The state was confident in the contractual language and its ability to terminate the contract, and therefore, felt confident proceeding without the final report,” said Corey Egel, a spokesman for the public health department, of the renewal.

The state withdrew its threat of sanctions on Nov. 10 “based upon the demonstrated correction” of issues.

The existence of the investigation in February was made public after a story by CBS 13 in Sacramento highlighted issues in the lab, with whistleblowers telling the station earlier this year that they saw lab techs sleeping or watching videos while processing nasal swabs and that unsupervised staff processed samples before completing required training.

The state opened a separate investigation into the allegations made in the CBS report. A federal investigation of the lab by the Centers for Medicare and Medicaid Services is ongoing, Egel said.

The documents released Monday show the state issued a report to the lab in April highlighting major, widespread issues that state investigators said threatened the accuracy of tests conducted at the Valencia lab. Among the findings from inspections in February were that the lab failed to assess the competency of more than half of its staff before allowing them to independently process, test and report patient samples. The lab responded that all employees were trained as required, but that there was a delay in documenting that training.

State investigators also said the Valencia lab did not have a policy in place outlining how to issue corrected results, and the state’s investigators found the lab was altering test results days after patients were initially notified without apprising them of the changes, according to the April report. When the lab lost or damaged a specimen, it blamed the situation on an “unsatisfactory sample,” state investigators wrote in April.

The state’s public health department issued letters in February and April instructing Laboratory Director Adam Rosendorff to fix the failings, writing that state investigators “determined that the deficient practices of your laboratory pose immediate jeopardy to patient health and safety.”

The state threatened to sanction the lab and Rosendorff, who is the former lab director of the failed blood-testing startup Theranos. Rosendorff is a key witness for the prosecution in the criminal trial of that company’s former chief executive officer, Elizabeth Holmes.

State officials promised to release a full report in mid-March on the issues facing the Valencia lab, with lawmakers criticizing the Newsom administration for stalling as the state’s contract with PerkinElmer was set to renew.

Some critics have questioned whether the investigation could remain impartial since the state was essentially investigating its own lab. The Laboratory Field Services at the public health department operates independently, said Engel, the department’s spokesman.

The Newsom administration released its report Monday, which largely downplayed the issues facing the lab, characterizing the deficiencies as those “routinely found in laboratory inspections,” and said each problem had been corrected. The report said California’s public-private lab is a model other states should emulate.

“The regulatory process worked as designed, addressing the identified deficiencies and holding the laboratory operator accountable — ensuring that the integrity of tests processed at this laboratory were not impacted and high standards were maintained,” Dr. Tomás Aragón, the director of the state public health department, said in a statement.

The report touted the lab’s achievements, saying it has helped increase testing in high-risk communities and to date has processed more than 5.5 million specimens from churches, schools, clinics, essential workplaces and other sites.

The lab processed 10% of all tests performed in the state during the past several weeks.

The state’s contract with PerkinElmer dictates that California pays for tests based on the number processed. The report said the cost is $55 per test for community and employer programs and $21 for school-based testing.

To date, the state has paid PerkinElmer $716 million, of which $684 million has been reimbursed to the state by the Federal Emergency Management Agency.

In October 2020, Newsom toured the newly constructed facility in Valencia that he said would create 700 new jobs in Southern California when it reached full capacity. State officials said the lab was built to ensure adequate testing in schools, for healthcare providers and in hard-to-reach communities using polymerase chain reaction, or PCR, diagnostic tests.

“Earlier in this pandemic, our ability to test Californians for COVID-19 and get results quickly was hampered by supply chain challenges and overwhelmed laboratories — so we built our own supply chain and our own lab with PerkinElmer,” Newsom said in a statement that October.

The state’s contract with PerkinElmer requires the lab to have a testing turnaround time of 24 to 48 hours, which public health officials said is critical to limiting the spread of COVID-19 by allowing for timely contact tracing and quarantining.

State data shows the Valencia lab processed nearly 161,000 tests during the week of Nov. 7-13, of which 66% had results within one day and 30% within two days. By comparison, commercial labs processed more than 1 million tests, with 78% of those results returned within a day and 18% within two days.

But the Valencia lab has fallen behind amid higher demand. Between Sept. 26 and Oct. 2, when the lab processed nearly 233,000 samples, a third of the results took more than three days to process, state data show.

“California seized on the opportunity to leverage its people, innovation and diversity to not only expand laboratory testing capacity, but the availability of specimen collection sites in neighborhoods that were disproportionately impacted by the COVID-19 pandemic,” the state’s report reads.