Warriors’ Steve Kerr on Rittenhouse Verdict: US on ‘Dangerous Path’


The same NBA “social justice warriors” who have been silent on China’s human rights abuses and missing Chinese tennis stars ahead of the Beijing Olympics have suddenly found the moral courage to speak out on the Kyle Rittenhouse verdict.

Rittenhouse, an 18-year-old charged with murder, attempted murder, and reckless endangerment after using a firearm to defend himself against three rioters during the Kenosha riots last summer, was found not guilty on all charges by a Wisconsin jury on Friday. 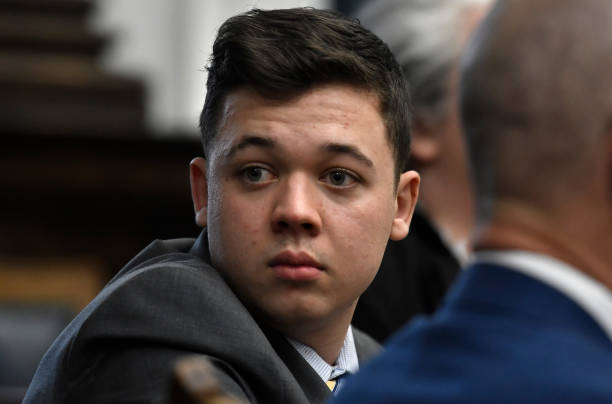 KENOSHA, WISCONSIN – NOVEMBER 17: Kyle Rittenhouse looks back as attorneys discuss items in the motion for mistrial presented by his defense during his trial at the Kenosha County Courthouse on November 17, 2021 in Kenosha, Wisconsin. Rittenhouse is accused of shooting three demonstrators, killing two of them, during a night of unrest that erupted in Kenosha after a police officer shot Jacob Blake seven times in the back while being arrested in August 2020. Rittenhouse, from Antioch, Illinois, was 17 at the time of the shooting and armed with an assault rifle. He faces counts of felony homicide and felony attempted homicide. (Photo by Sean Krajacic – Pool/Getty Images)

To Kerr, the head coach of the Golden State Warriors and outspoken human rights advocate on all issues except those involving China, called the verdict “really scary and concerning.”

“We are seemingly all right with a teenager’s right to take an AR-15 to an area where there is civil unrest. That’s really scary and concerning,” Kerr told reporters on Friday, according to Reuters.

Kerr continued, saying the verdict “poses great risk going forward if we continue to go down this path of open carry, and states determining that people, even underage people, can have weapons of war. This is America, and we’re treading down a dangerous path.”

The facts of the case, however, point to a clear example of self-defense.

That night, Rittenhouse and a group of armed volunteers were guarding a car dealership that had been torched the night before. After Rittenhouse put out a fire, he was chased by a rioter named James Rosenbaum, who reached for Rittenhouse’s AR-15-style rifle. Rittenhouse fired four times, hitting Rosenbaum and wounding him mortally.

A crowd then gave chase as Rittenhouse attempted to flee toward police officers. He was struck in the head with a rock by an unknown assailant and kicked in the face by someone referred to as ‘Jump Kick Man,’ whom Rittenhouse then shot at but missed. A rioter named Anthony Huber then hit Rittenhouse in the head and neck with a skateboard, and reached for the rifle; Rittenhouse fired one shot, killing him. Another rioter, Gaige Grosskreutz, who was armed with a pistol, raised his hands above his head, then charged Rittenhouse with his gun pointed at him. Rittenhouse fired, wounding Grosskreutz in the arm.

Kerr had no comment, nor was he asked about the “path” the country was on as rioters – many of them armed – lit Kenosha on fire in the hours and days following the police-involved shooting of Jacob Blake last August. 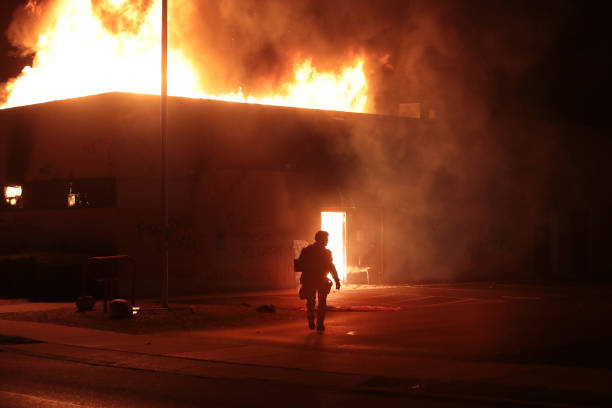 KENOSHA, WISCONSIN – AUGUST 24: A police officer stands guard in front of a department of corrections building after it was set ablaze during a second night of rioting on August 24, 2020 in Kenosha, Wisconsin. Rioting, as well as clashes between police and protesters, began Sunday night after a police officer shot Jacob Blake 7 times in the back in front of his three children. (Photo by Scott Olson/Getty Images)

Although there was nothing peaceful about the riots in Kenosha last summer, on Friday, the NBA Social Justice Coalition released a statement defending the right to “peaceful protests” and condemned “vigilantism.”