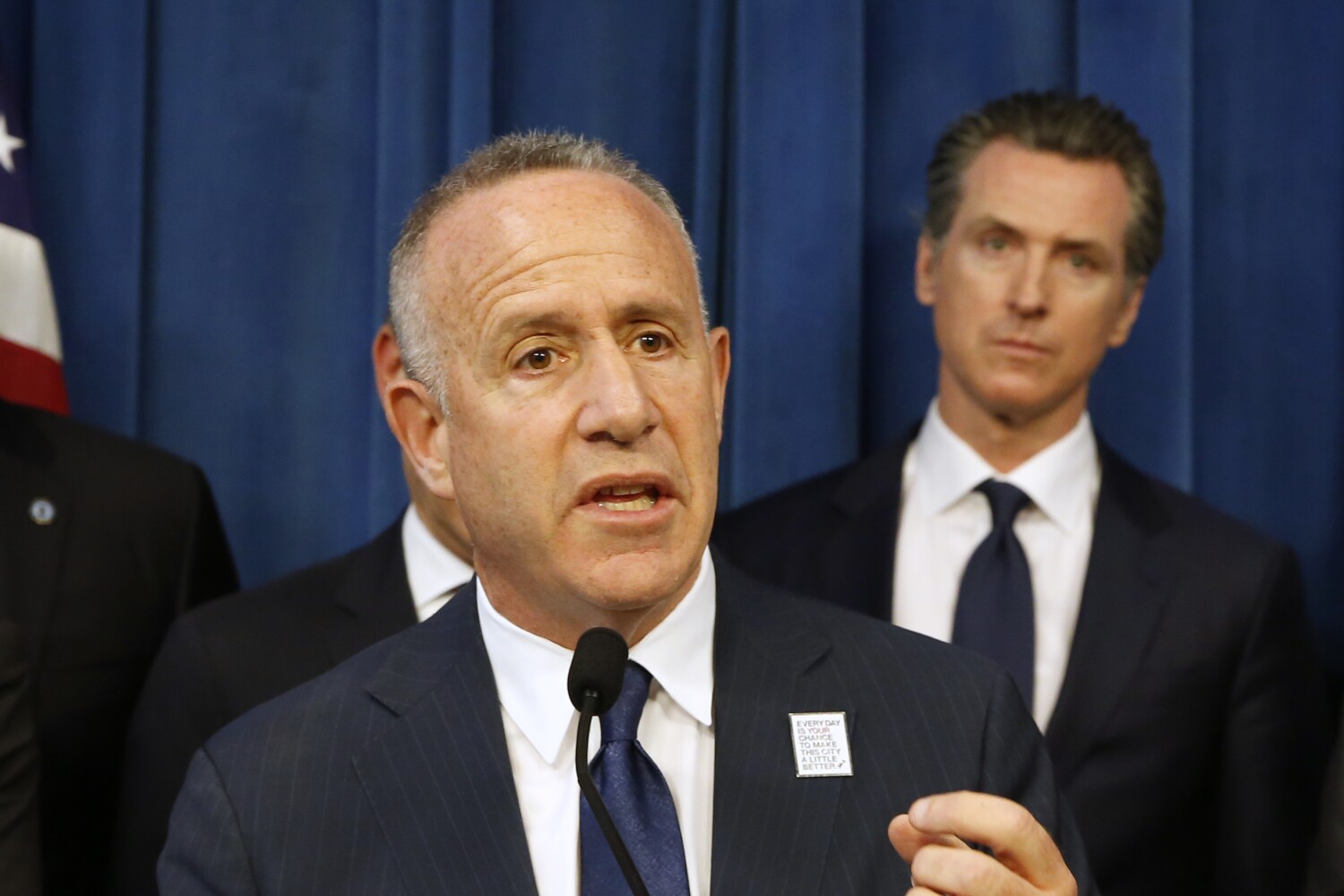 For years, Sacramento Mayor Darrell Steinberg has spoken out about the need for more housing and shelter for homeless people in his city.

His push hasn’t just been about building. It’s also focused on establishing some form of a legal obligation for government to provide a roof for people who have nothing. That ideological journey hasn’t been a straight line for the former state legislator who authored California’s Mental Health Services Act.

It started with a call for a legal right to shelter in 2019 when he served as co-chair of a statewide task force about homelessness.

This idea was met with skepticism and didn’t move beyond the whiteboard. Last year, Gov. Gavin Newsom vetoed legislation creating a right to housing, saying he worried it would be too expensive. During that time, Steinberg continued chewing on the idea, looking at places such as New York City and Scotland for ideas on how to enact legislation that would compel government to act and aid homeless people.

On Tuesday, Steinberg took another step forward, introducing what he is calling a “Right to Housing” for the city of Sacramento — and a concomitant “obligation to accept housing” on the part of the unhoused. Places such as New York City have some form of a right to shelter, but these are byproducts of litigation and not something independently put on the books by elected city officials looking for solutions.

Government is “not motivated to act with greater urgency … because housing people is not required,” he said.

Despite some trepidation, several councilmembers said they appreciated the audaciousness of the proposal and thought it would spur broader conversation about how to help better help homeless people in Sacramento. But if the ordinance were to pass, Sacramento would be stepping into an unknown — and it’s that uncertainty and the way the ordinance is written that has led to questioning from some of Steinberg’s colleagues, constituents and advocates for homeless people.

Steinberg’s proposal calls for the city to build enough shelter and housing for homeless people by 2023 — an ambitious timetable. It also creates a process in which homeless people have the ability to file a complaint with a judge asking for some form of shelter.

The ordinance, which would take effect in 2023 if passed, also requires the city to offer two different forms of shelter — for example, a spot in a hotel or a place in a sanctioned tent encampment. If, in certain parts of the city, there’s enough shelter capacity to make these offers and people don’t accept, then the city can enforce anti-camping rules.

This drew the ire of activists who called into the city council meeting Tuesday and zeroed in on how the proposal would allow the city to sweep people out of certain locations. Their frustration, which sometimes boiled over into profanity-laced excoriations of the mayor, focused on how it allows the city to make offers of interim housing in shelters and sanctioned tent sites rather than in permanent housing.

The ordinance says these sorts of locations can be used “so long as the temporary shelter placement includes a plan for each person to attain permanent housing.” That language is far too vague for many, suggesting that the ordinance is really about clearing out visible homelessness. The last federally mandated count in 2019 found about 5,500 people were homeless in Sacramento County on a given night and estimated that up to 11,000 people in the county experienced homelessness at some point that year.

Local officials calculated in 2019 that Sacramento County has 36 homeless people for every 10,000 residents, while Los Angeles County has about 58 per 10,000. But as in Los Angeles, much of the homelessness is concentrated in the city of Sacramento, which has about one-third of the county’s overall population of 1.5 million.

“Where will they go? What will be offered to them? Who will and how will they be compelled to move,” Smith said.

“Let’s start with a plan to build homes.”

Steinberg has devoted $100 million to homelessness over the next two years, using money that has flowed to the capital from the state and federal governments. That money made possible a master siting plan for a slew of new interim and permanent housing construction, which could end up getting about 9,000 people off the streets. The majority of the new building would be devoted to interim housing. At the meeting Tuesday, Steinberg said he wouldn’t use money from the city’s general fund to do more building. It is incumbent that the state and federal government pony up more money to help, he said.

Steinberg’s desire to create a right to shelter and an obligation for people to accept it is based on broader assumption. He said he thinks that passing the ordinance will be the catalyst for more action from government, the philanthropic world and private developers. The city is in profound need of more affordable housing. A recent report found that Sacramento needs 16,769 new housing units for low-income residents by 2029.

Advocates who spoke at the meeting said Steinberg would be better served by requiring that a larger percentages of new housing to be set aside for people who are poor.

“Our neighbors need housing, not more trauma,” said one resident, Rose Cabral. “The focus should be on what we want to see in regard to housing, which is the problem, and less on our unhoused neighbors, who are not the problem.”

Steinberg insisted that outreach workers would be leading the way in trying to get homeless people to take offers of shelter. Cops wouldn’t be involved, he said. Still there’s a need to have some mechanism to keep streets clear and clean, he added.

No vote was taken on the proposal Tuesday evening, and it was sent to one of the council’s committees for more scrutiny. Throughout the meeting Steinberg insisted that the draft ordinance was a start and welcomed suggestions about how to improve it. Most members of the City Council were supportive in some form — but wanted to know more.

One key area of concern was how it might conform with the Boise vs. Martin court decision, which prohibits cities from ticketing or arresting homeless people for sleeping or camping on public property unless there are shelter beds available as an alternative. The specter of the ruling lurks in the background as elected officials up and down the state contemplate how to create rules about where people can sit, sleep or lie. During the meeting, a city official pointed out that on a nightly basis, Sacramento’s interim housing options are nearly always at capacity.

Los Angeles recently instituted a new package of anti-camping laws, which include a requirement that outreach workers document the offers of shelter they have made to people before forcing them to move.

Steinberg, a lawyer by training, said that municipalities have very little clarity about the ramifications of the Boise ruling.

“Everybody has a different interpretation of what we can and can’t do,” he said.

Eric Tars, an attorney with the National Law Center on Homelessness & Poverty who worked on the Boise case, disagreed and said that he had been encouraged when he heard that Sacramento was considering a right to housing but disappointed in the resulting ordinance. He doesn’t buy that the city will be induced to create more housing. He also said that the plan should do more to clearly define what permanent housing the city is obligated to offer, and how it’s going to get to that goal.

He said the only option for unsheltered Sacramentans will likely be various forms of interim housing, where they will get stuck because there’s so little affordable permanent housing available.

“I like the fact that they passed a comprehensive plan to do siting [of new shelters and housing], to make sure that there’s some options in every district of the city. That sounds like a very good practice,” Tars said.

“Still it sounds like they want to be able to take people from where they are, move them wherever they say they should be, and call it a ‘right to housing.’ That doesn’t sit well with me.”

Memo Montes has been living on the streets for more than six years with his pit bull Weepers, whom he adopted while he was homeless, in a tent whose bottom is covered in carpet samples with names such as “spice cookie.”

Montes, like many living close to Sacramento’s “safe ground” sanctioned tent camping site, had heard about Steinberg’s proposal and had doubts.

“What happened to constitutional rights?” he asked. “People have different ways of living.”

Montes is a methamphetamine addict and former Marine who estimates he has spent about 36 of his 64 years incarcerated and gets by “selling anything I can except myself.” He would never leave Weepers, whom he found at age 5 weeks and bottle fed. He also doesn’t want treatment for his addiction, which he believes he can fight himself. He said he has cut his habit down to about $20 a day.

“I am ashamed of where I live, but I am alive,” he said, rubbing at a painful spider bite on his hand. “I got myself on [meth], I can get myself off.”

Steinberg has already said he’d be willing to amend ordinance to ensure that people could bring their pets and possessions into whatever form of shelter they choose.

Though Montes has tried and failed to get help with housing, he said a mix of personal troubles, including his addiction, as well as bureaucratic hurdles, keep him from success.

“Every time I get close, I have trouble keeping my appointments,” he said, hugging Weepers for support. “I’m lost.”

Nearby, in an RV with a bright green charcoal grill out front and blue fabric hung over the windows, Aaron Lau also had heard of the proposal and was leery.

He and his wife, Madeline, had inherited a house in nearby South Sacramento, but lost it to a tax lien. A friend gave them the RV, and they’ve been living in it since July.

He doesn’t want just any housing, he said. “I don’t want to go to a halfway house, or a house with 10 people in there and two bedrooms,” he said. He’d take a hotel or something more private, but, “you can’t force anybody to do what they don’t want,” he said.

Steinberg said he sees the draft ordinance as a provocation to do something different. He recognizes it’s imperfect but also knows he can’t wait. His hope, he said, is that the debate in Sacramento will inspire other cities and the state to act in a similar manner.